From Wikipedia, the free encyclopedia

Bottled gas is a term used for substances which are gaseous at standard temperature and pressure (STP) and have been compressed and stored in carbon steel, stainless steel, aluminum, or composite bottles known as gas cylinders. 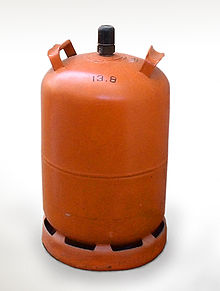 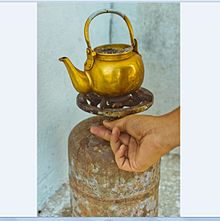 The substance liquefies at standard temperature but increased pressure. Examples include:

The substance is dissolved at standard temperature in a solvent. Examples include:

The substance is liquefied at reduced temperature and increased pressure. These are also referred to as cryogenic gases. Examples include:

Note: cryogenic gases are typically equipped with some type of 'bleed' device to prevent overpressure from rupturing the bottle and to allow evaporative cooling to continue.

The general rule is that one unit volume of liquid will expand to approximately 800 unit volumes of gas at Standard temperature and pressure with some variation due tointermolecular force and molecule size compared to an ideal gas. Normal high pressure gas cylinders or bottles will hold from 200 to 400 atmosphere (unit)s. The atmosphere units pressure held by the bottle is equivalent to the number of volumes of standard temperature and pressure of the gas held by the bottle for an ideal gas.

Because the contents are under high pressure and are sometimes hazardous, there are special safety regulations for handling bottled gases. These include chaining bottles to prevent falling and breaking, proper ventilation to prevent injury or death in case of leaks and signage to indicate the potential hazards.

The United Kingdom and other parts of Europe more commonly refer to 'bottled gas' when discussing any usage whether industrial, medical or liquefied petroleum. However, in contrast, what the United States calls liquefied petroleum gas is known generically in the United Kingdom as 'LPG'; and it may be ordered using by one of several Trade names, or specifically as butane or propane depending on the required heat output.

Different countries have different gas colour codes but attempts are being made to standardise the colours of cylinder shoulders:

The user should not rely on the colour of a cylinder to indicate what it contains. The label or decal should always be checked for product identification.

The colours below are specific shades, defined in the European Standard[1][2][3] in terms of RAL coordinates. The requirements are based on a combination of a few named gases, otherwise on the primary hazard associated with the gas contents:

Diving cylinders are left unpainted (for aluminium), or painted to prevent corrosion (for steel), often in bright colors, most often yellow, to increase visibility. This should not be confused with industrial gases, where a yellow shoulder means chlorine.